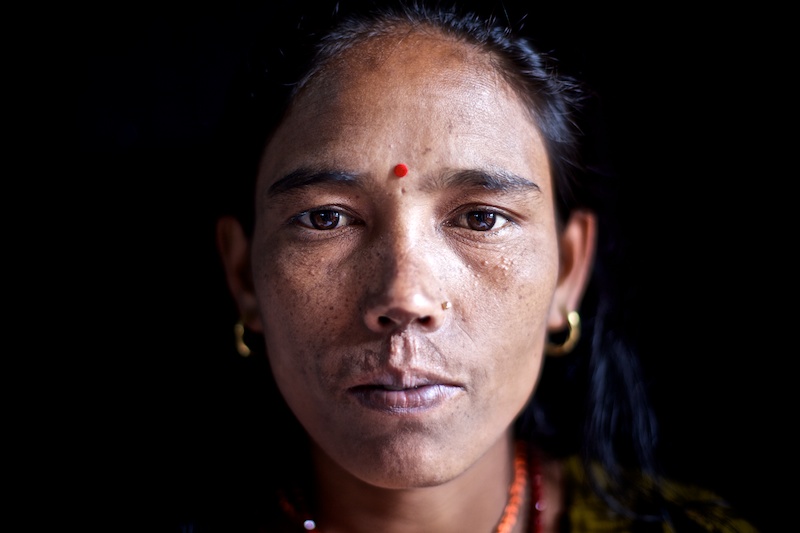 Violence against Women is a disturbing growing trend in Nepal. The following testimonies are from women who suffered gender based violence:

– “ When he wanted to sleep with me, he used to come close to me and care for me, otherwise he used to hit me when he was drunk and when sober he start arguing with me. When I worked I was given food to eat but I had to listen to lot of sarcasm and abuse so I felt as if I shouldn’t eat it. When I used to go to the fair to work, my mother in law would tell me to eat there so that I was not served food at home. Not only that, when I used to return from work, both my mother and father in law used to accuse me saying that I carried AIDS and when I rested, they used to pull my hair. My father in law was worse than the woman. It was getting too much for me and was beyond my tolerance. So, one day I finished all the work at home, tied up my things and went to my auntie’s home.”

– “Everything was fine at the beginning. It changed suddenly when my husband got a rash all over his body and the medication he was on did not do any good for him. He was taken to a Shaman for treatment. The shaman told my mother in law that it was because they have a witch at home and she gave him the rash. After hearing that from the shaman, my mother in law and other family members started regarding me as a witch. After that day, I was not treated well in the family. Later on, they did let me stay, but they gave me left over food from their plate and gave me a room like a kennel where it was uncomfortable and dirty.”

– “I do not understand why he married another woman. I feel sad when I think of why he did that, and for what? He says that he will look after both of us equally but it has already been thirteen years since he married me and has not provided me with a penny. I earned for the baby and myself. I still love him, which is why I am still staying with his family. There were times when I did not have food to eat and it was so difficult to look after my son. Still I did not run to my parents and struggled at home with my in laws. Now my son has already grown up so I will continue to stay with them.”

– “Since my in laws used to treat me badly, sometimes I stayed at my parents and sometimes I stayed home. But I have not left home completely. My husband started returning home drunk and making fights with me. He hit me and complained that I don’t have kids. I used to get scared and either run to my parents or either tolerate his physical abuse. I tolerated the domination and abuse from my in laws and husband for fourteen years. Even if I went to my parents and stayed there he never bothered to call me, I had to return myself. I used to think that it was useless talking to a person who is always drunk. So I kept quiet and tolerated his tantrums. He does not give me anything. I get a pair of cloths once a year and the rest I have to manage on my own. I earn money working at the fair.”

– “ I was already so sad that he did not look after me and was more shocked when he got married to another woman and brought her home. I thought how could he do that to me, first of all he didn’t give me any money and on top of that when I tried to earn myself, he took all my money and then brought another lady home. Still, I stayed for three months. My sauta (fellow wife) used to complain to my husband all the time. He used to hit me and I was put in a separate room. They did not give me food, but I had to cook for him no matter what the case was. I felt helpless and cried out of hunger.”

– “My husband has not called me yet. I heard, when his friends asked him to call me, that he does not care for me anymore. I don’t know why he betrayed me all of a sudden. When I was living with my mother in law, she told me that I was ugly looking and my husband could get lots of beautiful woman. I still stayed with them thinking that my parents would have a bad name in our society. I never got any clothes from my in laws. For many months I survived in the limited clothes that I had with me. It was too much for me and I could not tolerate it. Therefore, I left home and went to my sister’s place.”

“I got married at a very young age when I didn’t even understand what marriage was like. To have my husband hitting, kicking and abusing me, I feel sad, I feel like crying and I blame my fate. I did not get anything from him. When my husband used to work in India he used to fight with everyone. He injured his head, which is why he got mentally ill.”

I would like to give a big thanks to these brave women. They are amazing human beings. I will always keep this experience in my heart. I would also like to congratulate them for their huge effort in trying to lead a normal life and to live without any shame. None of this could have happened without the help of APEIRON, an incredible organization, which has helped me cover one of the biggest problems women are suffering in the world: domestic violence.

Men have a huge debt to women. It’s not only nation states that have to create legislation to protect women, but also men who have to understand that there are no excuses for such acts. No matter what religion or culture, women cannot be seen as property.