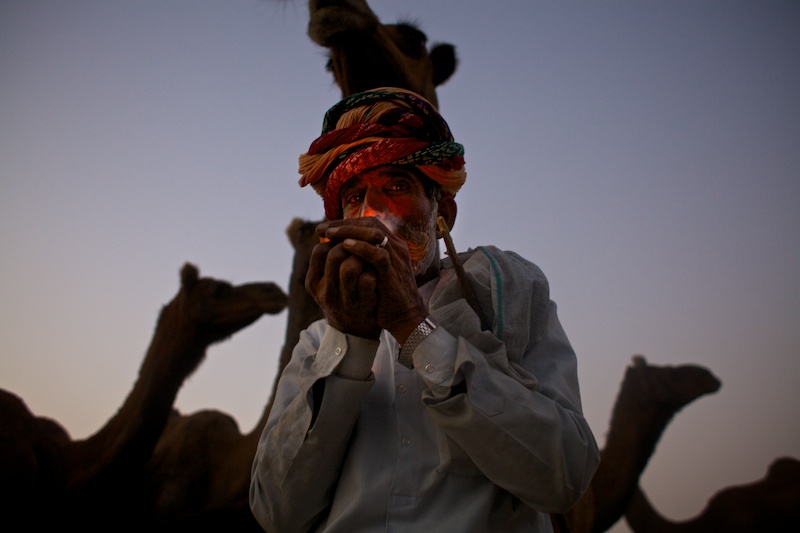 If you decide to travel around India keep in mind to write down Pushkar, a town in the Indian state of Rajasthan. It is a town that will fully capture your attention. It is a place that combine a magnificent architecture along with a deep culture and beautiful people.

At the time I visited the city the Pushkar camel fair took place, which is a highly recommend travel experience. The Pushkar camel fair commences in Nawami (ninth day of fortnightly phases of moon) and ends in Purnima (Full Moon) in the month of Kartika (October or November according to the lunar calendar)

The city organizes many activities during this time. Thousand of people come, not only for enjoying the games and competitions that take place all around the city but also to sell and buy camels and horses.

Pushkar is one of the five sacred dhams (pilgrimage site) for devout Hindus and one of the oldest cities of India. It surrounds the sacred Pushkar Lake. During the festival thousand of villages headed for taking a bath in the sacred lake. The streets are full of people all day long, buses and tracks come one after the other bringing people from distant villages. After a swim, people visit the only Brahma temple in India (Brahma is the creator of the universe according to Hindu religion).

Despite of the religious believes, Pushkar is better known for the camel fair. Thousand of animals are brought from all corners of the desert. Men buy and sell camels, horses, cows sheep and goats. The owner’s sleep in tends while the animals are exposed outside.

Every aspect, every detail, every person is special. Farmers, trades and villagers come from all around Rajasthan. It is a time to fully appreciate and witness the colours and the people of one of the most traditional festivals that takes place in India. It is one of the world’s largest camel fairs.

During the festival many people come to pray at Pushkar Lake. It is an spectacular moment for the eyes. Candles and colours are all around. The environment is exciting and friendly.

I decided to cover this festival. However, when I went in the mornings to take pictures I found more photographers than animals, and the environment was horrible. How could I take pictures and approach people without being pointed as another photographer? I bought a camel and called “Pinto”. My idea was to try to sell Pinto while taking pictures. The idea was fantastic and I could get to know how to make business with desert people.

The market of buying and selling camels is a business that takes time. Nobody trusts anyone. Prices change depending who is the buyer. Long talks take place; smoking cigarettes and drinking chai come along with. The camel is brought and analysed. There is always a “problem”, which causes the price to fall. The situation puts you back on time: in the middle age.

The discussions are long. Everyone wants to make a point. The arguments flow here and there. Emotions are on the table. The conversation can ends on laughs, hugs or screams. Everyone is hearing. Selling a camel can be extremely difficult.

Here are some of the pictures I took,