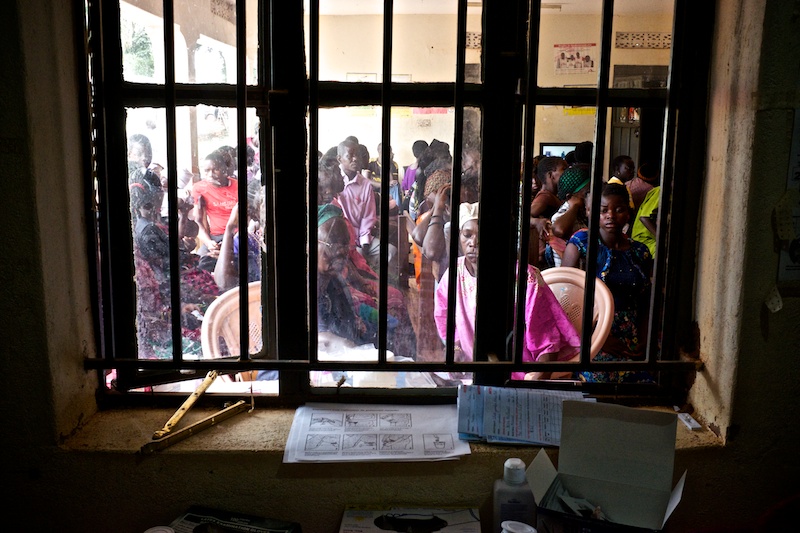 I visited the city of Yambio, located in Western Equatoria State, South Sudan. It is a relatively peaceful town where life tries to follow its normal course.

The roads are in poor condition. There is one market, one hospital, three hotels and few houses around the main road. Groups of young men wait along the road in motorbikes. They are the taxis in this town. The rest of the vehicles come from NGO’s, the local Government, and few of them are private.

The town lacks of water and electricity supplies. In the mornings, children and women carry pails with water on top of their heads, which is collected from small lags or rivers around the town.

My room is small. It has one table, one bed, one chair and one mosquito net. After observing mosquitos all these years, I got to the conclusion that this insect has the behaviour of a well-trained terrorist. It has the perfect suicide instinct to traumatise his victims. Mosquitos are a powerful army, which are not afraid to die and which carry a powerful weapon: Malaria, which along with HIV, are the biggest concerns among the community in Yambio.

Businessmen usually meet in “Tourist Hotel”, the most expensive hotel in Yambio where business with wood, gasoline and other natural resources take place. Everyone has something to say, to comment or to complain.

But outside the hotels, life is hard. Young women and men walk along the main road with apparently not goal in life. People walk, walk and walk. It does not look they are going to a specific place. They just walk, I guess looking for some opportunities of getting either food or money.

On the top of this, the missionaries come to spread the word of god (no capital letters), to indoctrinate, to change cultures, to be able to manipulate and to teach obedience, to introduce what is heaven and what is hell. To show what is good and what is bad. They come to instil guilt, sin and forgiveness. To preserve their benefits, and to show that white people are still the ones who are right. Therefore, you black, must follow.

In the hospital, one can hear the slow walks of the people. In the paediatric department, mothers and fathers look after their ill children. Some got malaria; some others face malnutrition or HIV, the illnesses and the problems these people face are innumerable.

Families spend time along with their relatives, praying and observing how the patient, the father, the mother or the grandson, are improving or getting worst. People wait, they have a talent for this. Time pass but nobody notes it.

A premature babe with 1.5 kilograms was born. His parents are black, but the babe looks white. “All babies are white when they are born” the doctor said. I did not know that… I also did not know that someone with 1.5Kg could be alive. But there he was: small hands, small feet, small fingers, everything was small. We moved to the next house, where HIV patients rest.

What happened to her? I asked. “An HIV case” the doctor said. The patient had a sad look. Her body is the prof of the illness. I wondered if she had a name. She looked at me and gave me a polity smile. I sat in the bed next to her. Her body was tired. Her skin was wrinkled. “How old are you?” I asked. “I am 18 years old”, she said. We looked at each other for some seconds. “What was she thinking?” I wondered. She did not have the energy to talk…

A nurse came running “Doctor we need you in maternity”. We run from one house to the other. “Andy” the doctor shouted. I went inside the room and saw for the first time in my life a delivery. Two pregnant women were in the room. The air was heavy and the room was small. The staff was moving in different directions. The doctor looked at me and I looked at her. She was concerned. One baby came; he was cover by a white-green color. The umbilical cord was holding from his stomach. I saw the mom, she was bleeding, exhausted and still had some energy to pray… she put her arms up and started screaming “Allah! Allah! Allah!”

The second delivery started. Some how I came back. Was this real? I am use to see death, illness, poverty and misery. But for the first time in my life I saw how life starts. The delivery had a problem. I could see the doctors telling the mother to push: “Push!, Push!, do not stop pushing, push!” I did not have to be a doctor to know that something was wrong. The mother could not push anymore. She looked around to find someone who could help her; she said something in her language, the doctor keeps screaming “Push, Push!” the translator start repeating the same in English “push, push!”

If they were nervous, I was in shock. I could not stop thinking, “Take pictures, take pictures, and take pictures” but I could not function. Finally I put my eye in the camera, and start shooting. I got closer; the babe’s head came out of the mother. I could not believe what I was looking. For the first time in my career I start crying. The baby came out. He could not breath. The doctor took the baby and put it on a table and started rubbing the child with his hands up and down. Another doctor came and took the child’s feet and gave him a pat on the soles of them… the next thing I hear was a deep and long scream.

Life came with a cry. From that moment there is just one thing to do: trying to survive in a country with not future.