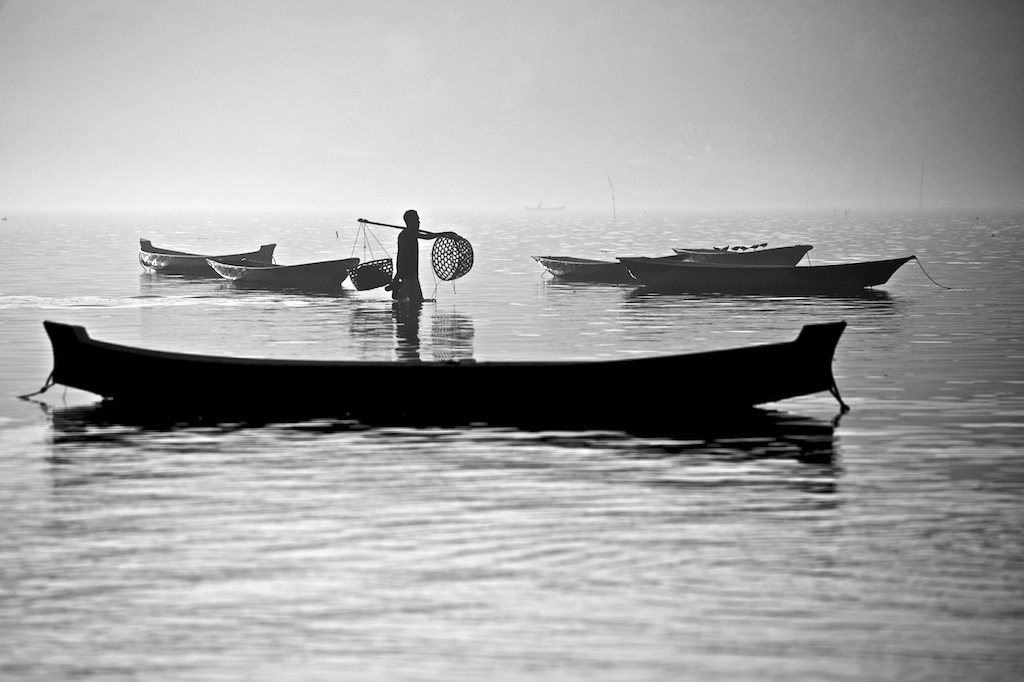 “…seaweed can be smelled miles away…” said an old, short man. Nusa Lembongan is a marvelous place home to a unique marine environment, one of the most vibrant in the world and known very well amongst divers. It is also a paradise for surfers who spend their days enjoying the beaches, sun and waves.

Full of resorts, mostly Australian owned, Nusa Lembongan is a favoured destination for tourists and on the surface it appears that everyone here enjoys life. Everyone except the 90% of local people who populate the island and live under extremely poor conditions. It is a hell disguised as paradise.

Once you take a better look at what is happening, one can distinguish the seaweed farmers from the rest of the people. Shy and old, seaweed farmers have been deeply affected by the tourist boom. Now their children do not want to be farmers, as the tourist industry can provide them with better earnings.

“When I was young, I remember I was scared to be alone at home when my mother and father had to work in the ocean at three in the morning. So my father made a bamboo basket with some pillows inside and a tube underneath so it could float. I slept inside there every day, on the ocean, until the sun came up. I saw my parents working very hard and we got just enough money for food. At this time, I promised myself I would not do this work, and I would help my parents to have a better life. That’s why I am now working at this hotel with my brother in law. We make 10 times more money, and my father and mother can be at home” Putu said. He is a young man who runs a small guess house in the island.

Walking around Nusa Lembongan provides a better view of the huge problem faced by the population of this little island. Many areas are empty now; the physical condition of some of the older farmers does not allow them to work anymore and the possibility that the seaweed farming will disappear completely is becoming a reality.

Looking at the possibilities the farmers have, one realizes that there are not many. This is the only way they have to earn money and survive. Most of them are elderly and do not speak English. The island resorts prefer to hire young people, corporate responsibility does not exist here.

The farmers used to be able to harvest 40 tons of seaweed per month. Now it’s 25 tons, with a price of only Rp 3,000 (77 US cents) to Rp 4,000 per kilogram. The price of seaweed fluctuates significantly, and it can drop as low as Rp 2,500 per kilogram. In other words, the seaweed farmers receive between 600 rupiah to 3,500 rupiah per kilo depending on the type of seaweed and the market value on the day. Poverty is about more than inadequate income. Farmers live without electricity, and many of them without fresh water. There is not access to any public services. Here one can see how corruption hurts the poor more than anyone. “This is all mafia, we do not believe in the State anymore…” An old farmer said.

The seaweed is used in food and cosmetics all around the world in the form of an extract called carrageenan. This can be found in many products promising softer hair and skin.

After the harvest, the farmers dry the seaweed under the sun for two to three days depending on the season. Farmers in Nusa Lembongan don’t have a processing plant and not even a proper drying facility. The State casts no shadow here.

Nusa Lembongan is a mirror of corruption, a place full of incentives for high investment projects at the expense of the poor people who live there.