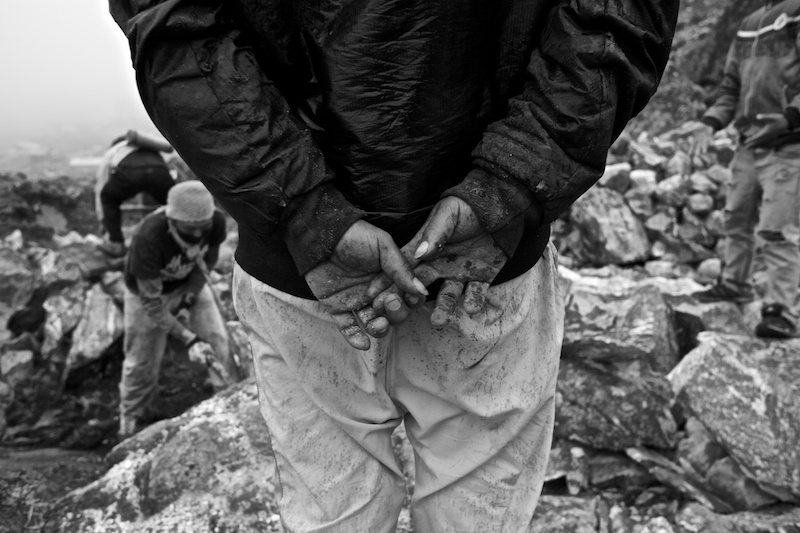 At 4.371m children and men break stones washed down from the top of the Himalayas during the rains and gather them in Pheriche, Nepal. Their work is inhuman and conditions are extreme. Temperatures can reach minus 10 Celsius or below. During monsoon time, rain and mist cover the mountains and visibility is scarce, further endangering the safety of people carrying over 70 kg of stones on their backs for two hours on steep terrain.

The work resembles a real chain gang where medium and small size stones are broken up in stages, until they reach the last village down in the valley and are then traded for construction in Kathmandu. Day work is 12 hours, day pay between 3 and 5 USD, and no rest in the week. The contractors provide food, yet the workers live in huts with shared toilets and have no facilities or clean clothes. These people are among the 21 million people in forced labour according to the UN International Labour Organization (ILO).

Forced labour in the stone breaking industry affects several villages in this region of Nepal, where people are caught in extremely poor working conditions and end up in debt by borrowing money for basic survival. It is a vicious cycle and Nepal is a country where child slave labour is becoming a growing problem. It is estimated that there are approximately 2.6 million child workers in Nepal.

What is happening here resembles slavery which was abolished by most countries 150 years ago, yet bonded and forced labour, trafficking and exploitation persist. Some claim that though these offences are present on all six continents, according to many reports nothing approaches the scale of these crimes in South Asia. It is an issue which entails addressing rules of law and developing basic principles. Until this happens, the attention in Pheriche will only be on the marvels of the Himalayan summits and the human cruelty there will continue to be neglected.