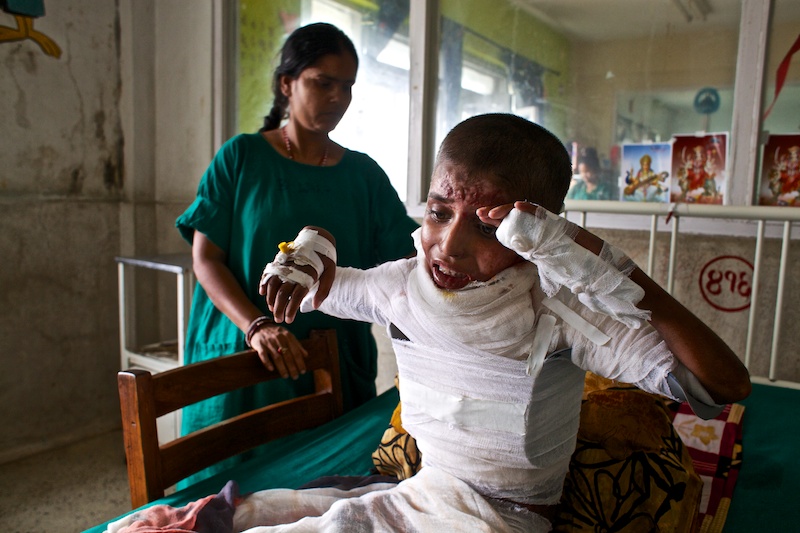 The number of burn violence victims is increasing in Nepal. This context is a bleak outlook. Domestic violence can end in dramatic results: death or a lifetime of suffering. It is women that are most affected by this issue.

Burn injuries are amongst the most horrific, painful and costly injuries that a person can endure. I witnessed the suffering of people in Kathmandu hospitals. Most of the burn patients have to be hospitalized for lengthy stays, lying in their beds all day long.

Some children and women are burned in domestic kitchens from upset receptacles containing hot liquids or flame, or from cooking stove explosions. Men are most likely to be burned in the workplace due to fire, scalds, chemical or electrical burns. However, domestic violence registers most of the incidents. The worst cases are women who are burned with kerosene or acid.

According to WOREC Nepal, 64% of all Nepalese women suffered from domestic violence in 2012. Only 25% seek medical support and 20% seek legal justice.

“She and her parents said it was an accident, but it was not. If you clean with oil or petrol, and you have that kind of accident, the entire body would be burned. It was a failed suicide attempt,” a doctor said. Suicide is the leading cause of death among women of reproductive age in Nepal. This requires more attention from the local authorities. In the special burns unit at the BIR Hospital in Kathmandu, women and men are waiting in 9 beds to recover from their injuries. Hospitals refuse to attend victims with more than 30 or 40% of burn injuries. BIR Hospital is an exception.

Some of the cases were failed suicide attempts. Some others were accidents that could be prevented with just ‘common sense’. Many of the children burned in Kanti Children’s Hospital in Kathmandu were too close to kitchens or candles.

Consultant Pediatric Surgeon Dr. Chaudhary has been working at Kanti Children’s Hospital in Kathmandu for more than 18 years. He knows very well the struggles in the field. “We are the largest hospital in Nepal. Our unit has just 22 beds to attend all burned children in the country! Sometimes there isn’t enough space. There is a need of coordination among partners for staff training in order to deal with burns cases” BIR hospital and Kanti Children’s Hospital are the only law costs hospitals that receive victims coming from very poor areas. There are no rural hospitals or ambulances to transport patients. Many of the patients have to travel long distances by bus to reach the hospitals in Kathmandu. Many of those were travelling by bus or minibus had more than 40 or 60% of their bodies burnt. Despite of the lack of infrastructure and the poor conditions of these two centres, the recovery rate is very high.

Public hospitals or the Government have not deployed preventive campaigns. However, BVS Nepal has been working very hard to raise awareness about the risk of burns through posters on public transport and messages on radio. There are two main messages: To make the population aware about safety measures when they are confronting fire. The idea is that the population adopt natural defences to protect themselves from danger. The second one is related to stopping violence against women: still a big issue in Nepal. Incidences of violence come mostly from Terai areas (southern Nepal) where the problem is due to life with family in-laws, the love stories of people who aren’t accepted, the dowry system, witchcraft, son preferences, etc…”

BVS Nepal is providing medical treatment, counselling, physiotherapy and nutritional support to burnt patients and recreational activities for the children in the Burn Ward at Kandi Children’s Hospital. Since 2010, 950 nutrition baskets have been distributed to patients at BIR and Kanti Hospitals. More than 350 burn patients received physiotherapy and daily counselling. In 2012, BVS Nepal has supported 28 patients for plastic and reconstructive surgery.

Survivors need to be fed very high protein diets to give their bodies the strength to fight such extreme injuries. A burn that is 20% or more of the total body surface area will increase the body’s energy (calories) demands by one and a half to two times of the normal amount.

The monthly cost of a patients diet based on two meals of rice, lentils, vegetable and mutton curry each day works out at Rs. 12000 a month (roughly USD120), with an additional Rs. 6000 (USD60) for the meals of the caretaker. Then the patient requires a further Rs. 15000 (roughly USD150) for additional nutritional supplements, such as Horlicks, milk, eggs, fruit juices, glucose, B-protein powder and biscuits. All these items are high in protein and are exactly the sort of food required by burns patients.

BVS Nepal is an amazing foundation. With few resources, they have achieved more than any other organization in their field. If you are in position where you can donate money (a small contribution can make a big difference) or if you want to contribute meaningful volunteer work, please consider contacting this organization.